"The Fabulous Cushman Brothers" - Visiting The Paramount Lot In Hollywood!

While we had finished our work on First Contact we were invited to the grand daddy of Trek Cons held every year in Pasadena The Grand Slam! This Con is huge... with thousands of participant every year! On our first day in LA we spent the afternoon on the Paramount Lot. Matt had rented a convertible Mustang and we had a blast passing through the famous Paramount gates on Melrose avenue. Giving our names security ushered us in to the central parking lot. We were then introduced to Doug Drexler who was a big part of the Star Trek Art Department. Doug had won an Academy Award for makeup on the Dick Tracy Movie but was not changing direction and working in design.
Doug took us past the infamous sets to the art department offices where we were able to meet Herman F. Zimmerman, Michael & Denise Okuda, Rick Sternbach and the very kewl John Eaves who imeadiately dubbed us "The Fabulous Cushman Brothers"! 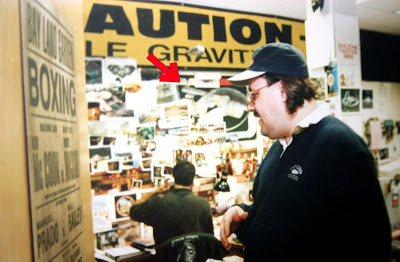 This Art Department had been in continuous use since the late 80's and there were thousands of drawings lining the walls of these offices. To my surprise one very prominent illustration on the back wall above Doug Drexlers desk is my original poster of the Enterprise D! It doesn't even count as surreal to be honest... its just a bizarre feeling of accomplishment and terror! 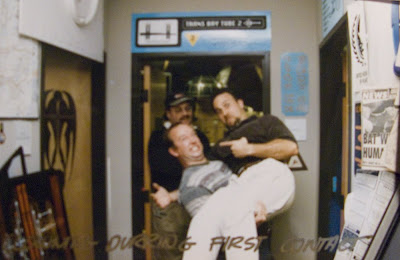 Returning form lunch with John and Doug it was easy to see these guys had allot of fun doing their work! That day we walked away with some great gifts of drawings and copies of their work.. and full tour of both Voyager and DS9 sets as Jem hadar swarmed around between takes! too cool! 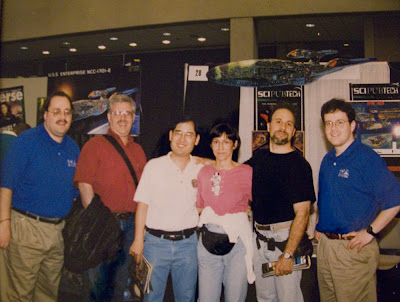 Later that weekend the Art Department came and supported us at our table at the convention! As we closed up our table at the end we gave them the giant foam board cut out of the Enterprise E we had shipped in for the show.... I'm sure it to went on to reside on the wall!
Posted by Christopher Cushman at 6:42 PM