The first few months after the poster was printed were great. There were the signed and numbered posters to be signed, and lots of orders to be fulfilled. There was plexy mounted Dura Trans created and donated to the Smithsonian's permanent Star Trek collection which includes the original 14 foot model of the Enterprise. To have ones work in such an important museum was quite an honor and it was very satisfying to see such a positive response to the poster. Plans for a new poster to start the Star Wars line were in the works and a first draft of the Millennium Falcon had been submitted! 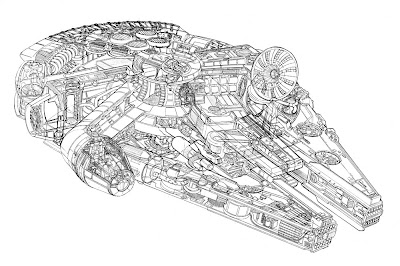 For a few months life was great! But something happened that would challenge me forever.

I cant put a date to it but along the way the folks at JDT stopped calling me. It was subtle at first but then the money stopped all together and my phone calls stopped being answered. Over the coarse of the next couple years I would ride a roller coaster of emotion as I had to resort to legal steps to communicate with the company that had brought my poster to life. This was a shock that I had never imagined would happen. About mid way through the process it seemed as though things might get better after we had the first deposition. Some money would be released in exchange for the balance of the signed and numbered posters to be signed. It quickly de-solved again and later in 1993 I found myself in court facing a jury and sitting across from the people who should have been my friends. The trial lasted the better part of two days with jury selection and all. When the fact began to be presented it was clear what JDT's motivation was. The poster was a huge success, a cash cow and the calculated royalties after two years was over 50,000 dollars. My lawyer did an excellent job of presenting my case and as I was about to see an even better job of picking the jury. Deliberation took perhaps 25 minuets which was very fast... it seems they had come to a unanimous conclusion right away but asked the court if they could award punitive damages on top of the money being sought for damages.

When the jury came back they had awarded me nearly $67,000 in damages and punitive. It seems the other lawyer neglected to ask any of the jurors if they were Star Trek Fans. They all were and were all appalled at how I was treated. I had won my case. Before I could be happy about the result I received a letter from another court stating that the entity known as JDT and Associates had filed for bankruptcy and that any moneys owed to me were likely never to come. I was devastated and angry and I can still feel some of it today. It runs deep and it has informed every business venture I have gotten into since that time. 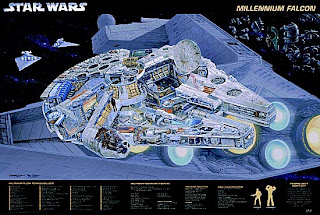 But as they say, Karma is a bitch! Several years later while visiting my art supplier I noticed a newly framed piece of art. It was the Millennium Falcon and the details of the finished piece looked far to familiar. I inquired as to whom it belonged and it turned out to be the artist scheduled to render my Falcon a few years back. My Falcon had just been published under license to Lucas Film. It seems that an end run around me had been attempted by JDT. They had used the profits of the Enterprise to complete the Falcon project.. When they lost in court it collapsed the project thus allowing my new company to come in and do the Falcon. Lessons in life often come from something negative and I was about to use my new found knowledge to take this work to the next level.
Posted by Christopher Cushman at 5:37 PM

Wow. So sorry to hear of such a difficult experience. I also had to learn the hard way about how devious companies can be. Makes one long for the more advanced ethics of the 23rd century!

I loved the 1701D poster. My buddies and I must have spent many hours looking at every nook and cranny!

Thw new Ent is similar in scale to the D I believe. I was wondering if you were thinking of producing something for the new version.

Thanks for blogging about these iconic works! I'm going to dig out that D poster now.

WOW, i'm really sorry to read abount the way that you've been treated by the company.

As a Star Wars fan, i have always lusted after the cutaway Falcon and last year i managed to get myself a copy. It is to this day one of my most favourite items in my modest collection and i hope to do it justice with a decent frame.

I always luste after the otehr Star Trek posters, but never really saw them here in the UK.

I'm looking forward to seeing what else you come up with.

WOW, sorry to hear this. I have this poster at home and it's one of my most favourite pieces.