Star Trek is more than just a show for me, I know it is fictional so not to worry I am well grounded in reality but Trek is a vision of the future that I subscribe too.  The world that Gene Roddenberry created is one that has surpassed the frailties of greed and selfishness of todays world.  The people of Earth 300 years from now live in peace, appreciate diversity and is a world where know one goes hungry or homeless.  As such Star Trek represents my personal beliefs and aspirations for the future.   I have been watching the show since September 1966, since day one.  One of my favorite aspects of the show was the Enterprise and the technology with in her.  When I turned ten my grandmother purchased a set of Blueprints of the Enterprise. The blueprints showed every nook and cranny of the ship and opened my imagination.  It was that set of drawings that convinced me that being an illustrator was what I wanted to be.  So you could say Star Trek inspired my life in a more fundamental way. 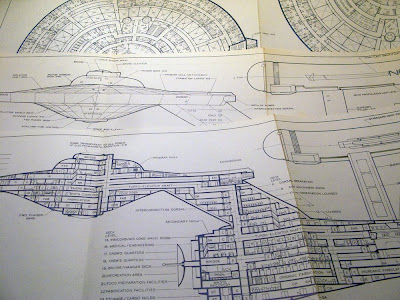 In high school I took every drawing and drafting class I could and in my senior year I entered a cutaway drawing of a Boeing 747 into a state wide Industrial Arts contest taking first place. From there I entered the Technical Illustration program at Ferris State University and I took as many illustration and design classes I could... some were more than what was required but I wanted to do it all! In 1979 Star Trek the motion Picture debuted and several of my class mates attended the opening in Grand Rapids Michigan.

(Sorry for the glare in this image, I have tried to remove as much as I could)
One of the highlights of the evening was the posters of the new revised Enterprise being sold, a cutaway technical illustration that had been airbrushed to near photo-realistic quality by an artist named David Kimble. David was at the peek of the illustration world and this illustration furthur pulled on my strings to be an illustrator and designer in much the way that first set of blueprints had. In 1981 I graduated with a degree in illustration and I went on to work a few short term stints in Ft. Wayne Indiana working on government contracts and briefly in St. Joseph Michigan for the heath Kit Company drawing how to manuals for the electronic kits Heath was famous for. By 1983 I had moved back to Detroit and began to work in ernest in the automotive industry. It was there that I really developed the width and breath of my experience in illustration and design world. I was fascinated with the technical cutaway as a format because in one single illustration you could show so much information about the most complex machines.

In 1987 Star Trek The Next Generation had debuted on TV and the world of Star Trek was re-born and in my mind the thought of getting involved in Star Trek was possible. In 1990 providence/fait and the opportunity presented it self or should I say himself. While sitting in the lobby of the Cadillac Fleetwood Plant waiting for and engineering meeting I happen to overhear a gentleman introduce himself to the receptionist in a way as if she should know who he was. It was David Kimble himself. Not wanting to miss an opportunity to meet this famous illustrator I walked up and introduced myself. I told him I was an illustrator with GM and that I had really enjoyed his work including most of all the Enterprise Poster! He asked if he could stop by my office the next day as he was headed to the GM Tech Centre where I worked and asked if he could see some of my work!
Some of my work! Wow I was very excited and I went home that day picking out a few choice pieces I had worked on as well I took a sketch of the Enterprise D from the Next Gen that I had drawn as I wanted to get his opinion.

The next day David stopped by and looked at my portfolio, and asked me on the spot if I would be interested in doing freelance work for him. He explained all the details and the level of work he would be needing which was to a very high standard. I asked him what he thought of the Enterprise illustration I had started and he loved it, I pushed the conversation into the direction of a possible collaboration figuring he had the contacts at Paramount. He looked less than happy when I mentioned that explaining that he had not profited from the first poster very well and preferred not to work with them again.
He sensed my disappointment and immediately offered up to put me in contact with someone at Paramount. I sent a letter and a copy of the illustration to the person he suggested who contacted me back stating they did not work with individuals but loved the work and suggested that I find a licensed Star Trek product company who might take my piece to the next level. Undaunted I sent letters to many of the companies on the list paramount provided me and within a few weeks I had gotten shot down with five or six responses. I was working freelance for a company called JDT Associates in Rochester Michigan and one day I shared my story and illustration with the owner. She immediately saw the value in the property and set out to become a licensee of Paramount. Within a year the project was on and I began to take the illustration to the next level. Paramount began to provide substantive input to my illustration with advanced galleys of a new book they were producing, the Next Gen Technical Manual. As well comments from Mike Okuda from the Star Trek art department started to flow in. To accommodate the level of detail the drawing was enlarged to 77 inches in length as this would allow me to draw the details of each deck. 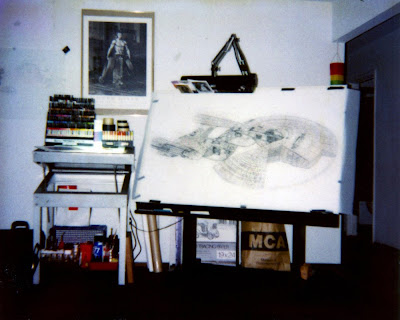 Within a couple months of steady work the Enterprise D began to fill out with a level of detail that even surprised me. 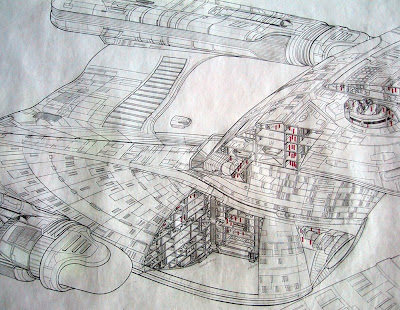 The first phase was the pencil drawing and the detail was minimal as you can see. 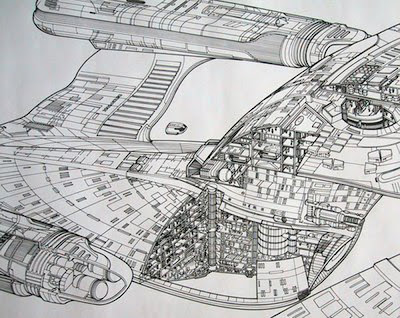 The second phase was the ink drawing on a frosted mylar which would give the drawing its fine line work and definitive detail!

Once this drawing was completed and approved by the folks at Paramount... an airbrush artist, Gary Richardson from Windsor Canada was brought in. Gary was a well know colorist who worked for McNammara and Associates in Troy Michigan just out side of Detroit. He was a fan of the original series and thought this would be a great project to work on. Within a few weeks he had completed the rendering and a large film of the final product was shot. During that time I was busy with the format of the poster including the size, design elements and the type. It was till the early 90's and much of the production was done by hand as computers had not fully come of age. I designed the format to reflect the technical displays on the ship... Large swooping bars enclosing the text and callouts of the various details of the ship. All of this was composed together with the image of the ship and the poster was now ready to be printed.

The poster was set to break its first record by eclipsing the original Kimble poster by two inches! At 50 inches wide this meant
that we had to print on a very specialized press and at the time there were only 5 in the entire country. We were off to Chicago's Carqueville Press who owned a 52 inch Mitsubishi five color offset press. This was and amazing machine at nearly 80 feet in length. We spent the entire day In Chicago as they adjusted repeatedly the press to optimize the color and alignment of the printing. Finally around 3:30 in the afternoon the first of 100,000 posters began to roll off the press. As the artist of the poster I was given the honor to sign off on the first perfect print. The press was locked down and the printing proceeded.

I came back to Detroit, it was done! I had entered my name into the lore and canon of Star Trek! What ever happened next was unimportant in that moment. I thought back on the twenty + years it took to get here and since that day I have never thought something was impossible to do as long as you believe in what you are doing.

In my next post I will talk about the next part of my journey as this poster and my work took turns even I would have never imagined.
Posted by Christopher Cushman at 1:30 PM

its a beautiful poster, would have been cool to have it blue-print style - the pencil drawings look amazing and have a more personal feel to them - thats why the DS9 tecnical manual wasnt as good as the tng, ToS and movie versions - too much colour!

great work! I just found the Kimble poster and a couple others in the ceiling of a house I just bought lol...any idea what it is worth or what I should do with it? Thanks for your input... I may end up being a trekke? after all