My Trek For Music _ A Rant On The Music Industry

I have given up on feeling bad for the brick and mortar retail stores! Even worse I have given up on the music industry for not understanding how to sell music. A couple of days ago I went to go purchase the soundtrack to the new Star Trek Movie. I love the symphonic feel of the new music and so I looked up the release date of the record and it was clearly May 5th. GREAT! I'm off to stimulate the economy to the tune of $20.00 and I head out to HMV (One of the largest distributors in the world) I ask the clerk if he can help me because my initial scan of the store is a blank.... "Sure!" he says as he hands me over a copy of the Soundtrack of Star Trek Nemesis! "Um No actually I was hoping for the new movie." Blank Stare "There's a new Movie?" "Are you kidding me?" as I point to the wall of special T-Shirts devoted to the Movie. "Let me look it up" he says... "yeah it came out the 5th.... we don't have any... in fact no store has any." "Why if you have the T-Shirts do you not have the music?" I asked back, I mean I am in a music store right. "I don't order the product" he shot back.
"This is why music stores are hurting" I countered "Would you like me to order you a copy?" "No thanks Ill purchase it on itunes!" I must admit that last line was said pretty loud as I wanted others to hear my frustration.

But I really wanted the disc for this one... liner notes etc.... so I moved on to Sunrise Records. "there's a new movie?" he said... I paused and looked at him... I raised my finger to the shirts and action figures and other assorted toys Sunrise was selling devoted to this summer block buster. "It made 112 million dollars worldwide on its opening weekend... yes there is a new movie" "Would you like me to see if I can order you a copy? I can probably get it here in a week." "A week?, I can get it from amazon in a day..." Again I am leaving the store and headed off to itunes.

I am boggled by the current state of affairs when it comes to retail and music. Both of these stores clearly were selling material that was related to what I wanted but not the piece related to their core business! Whats wrong with that picture. One look in HMV and it is clear that the sign is up on the wall... there is now two isles of ipod accessories and itunes cards for sale. Apple and to a lesser extent other online services have made selling music challenging. While this example was about a movie soundtrack it is clear that other forms of music are equally hard to come by and I personally blame the music industry for over charging for their products for years.
While many of us still want to do the right thing and buy our tracks on line, the industries shortsightedness and lack of any knowledge as to what we the consumers DO want clearly illustrates know one is at the helm. 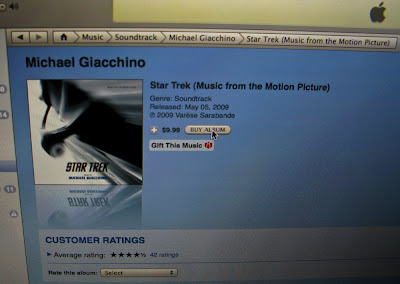 Later that night I down loaded the entire soundtrack for less than $10.00 off of itunes. I love my iphone/pod, I love Apple too but the recent change in pricing forced on to apple by the ailing music industry may continue to force others into illegal down loading. Yes I know that the tracks are now DRM free and they are at a recorded bit rate that is closer to CD quality but in my mind this is how it should have been from the beginning and at the 99 cent price point. Its not just me confirming this... itunes sales have been down since the change over. People are fed up that the music industry just doesn't get it! I have my music but the experience has left a bad taste in my mouth for HMV and Sunrise... They did not get my money.

Here is a piece of the soundtrack from the movie... enjoy!

Posted by Christopher Cushman at 6:19 PM